Italian language coach and polyglot. I help motivated learners to achieve fluency with resources that work.

Have you tried looking for historical figures when learning Italian?

Then, if you’re unfamiliar with Italian words, let’s try to learn Italian with Lucrezia Borgia.

Just in case, if you’re looking for free resources to learn Italian, there’s a large collection of short stories and news with slow audio for beginners to improve your understanding of the Italian language, culture & lifestyle. Even Italian swear words! 100% free!

Also, check out my Youtube channel for tips on how to learn languages fast. Get your daily dose of Italian!

Now, in this post, we’ll learn Italian with Lucrezia Borgia… Who?

While there are many women named Lucrezia in the history of Italy and Italian culture, this historical figure fascinated people for centuries and is still being studied by historians, often with surprising findings.

I added select Youtube videos in Italian from a history documentary, a movie, and an opera for those who want to practice listening with material made for native speakers.

The topic is not an easy one, so if you can’t catch every word, that’s totally normal!

Who was Lucrezia Borgia? 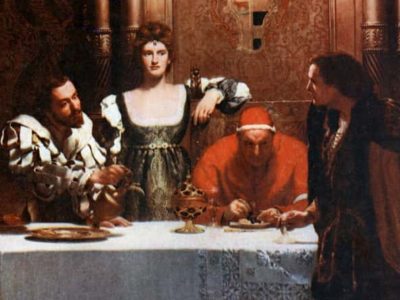 Lucrezia Borgia, (born April 18, 1480, Rome—died June 24, 1519, Ferrara, Papal States), was an Italian noblewoman and a central figure of the infamous Borgia family of the Italian Renaissance.

Her first marriage, to Giovanni Sforza, ended in annulment when the Borgia family no longer needed the Sforzas, while her second marriage, to Alfonso of Aragon, ended with his death, probably at the hands of Cesare.

When she married Duke of Ferrara, Lucrezia proved herself a capable and popular duchess, acting as a patron to a flourishing arts community, skillfully administering affairs of state, and devoting herself to acts of piety and charity in her later years. She was also a patron of the arts.

Lucrezia Borgia has been characterized in art, literature, and film as depraved, extravagant, guilty of incest and murder; however, scholars assert that there is, in fact, insufficient proof of Lucrezia’s alleged bad acts or her active involvement in the crimes of her notorious family.

Practice your Italian listening skills with this documentary film on Youtube about Lucrezia’s life.

Several movies and even a TV series were produced after Lucrezia’s story.

The 1940 Italian history movie directed by Hans Hinrich and starring Isa Pola, Friedrich Benfer, and Carlo Ninchi, portrays the life of Lucrezia Borgia in the last part of her life when she was Duchess of Ferrara.

Watching a hidden gem of Italian cinema about Lucrezia on Youtube is a nice way to learn Italian.

Lucrezia Borgia is a melodramatic opera in a prologue and two acts by Gaetano Donizetti. Felice Romani wrote the Italian libretto after the play Lucrezia Borgia by Victor Hugo. Lucrezia Borgia was first performed on 26 December 1833 at La Scala, Milan.

Here’s the most famous aria from this opera with Italian lyrics and English translation.

This is not the kind of Italian language that you’d hear from Lucrezia if she lived in our times: it’s the old-style language that you only hear in opera. However, some words are still used today and are worth learning.

Thanks to Youtube, you can learn Italian with Lucrezia at the opera!

Italian history, cinema, opera: a lot to learn with Lucrezia

The famous elements of Italian culture include its art and music. Italy was the birthplace of opera. The early film industry became internationally known for its historical spectacles.

You can find Lucrezia in all these forms of art and learn Italian through her story.

If you like stories of famous Italians, check out the post about the Italian experiment of Galileo Galilei.

If you had a hard time catching the audio of the Youtube videos above, try listening to short stories and news with slow audio for beginners and intermediate learners.